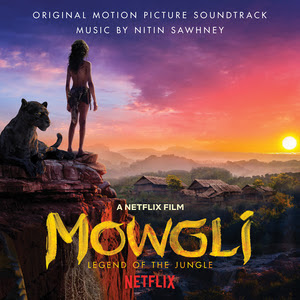 WaterTower Music is pleased to announce today’s release of the original motion picture soundtrack for Mowgli: Legend of the Jungle, the reinvention of Rudyard Kipling’s beloved masterpiece by acclaimed actor and director Andy Serkis, in which a boy torn between two worlds accepts his destiny and becomes a legend. Mowgli: Legend of the Jungle will see a limited theatrical release from Nov. 29 in Los Angeles, New York, San Francisco and London, and will then be available globally on December 7, only on Netflix, and will have an expanded theatrical release in additional theaters in the U.S. and UK.
The film was scored by British composer, producer, album artist, club DJ, songwriter, broadcaster, multi-instrumentalist, orchestrator and cultural tastemaker Nitin Sawhney, who is recognized as one of the most distinctive and versatile musical voices around today, achieving an international reputation across every possible creative medium. Sawhney also wrote the original song “Changes” which appears in the film and on the soundtrack and is performed by singer / songwriter Kara Marni.
Nitin Sawhney discusses working on the film: “The challenge of creating a fresh musical vocabulary and theme that would entice us into Mowgli’s universe was irresistible. That Andy Serkis was directing made it an unforgettable experience in the waiting. Andy is nothing short of a genius. The stunning film, of stellar performances and endlessly epic scenes, scored itself.”
The director further elaborated on the collaboration. “As I was trying to search for (Mowgli’s) tone, its heart, its pulse and rhythm, I knew one thing in my heart. That I wanted my friend Nitin Sawhney, one of our generation’s greatest polymaths, an extraordinary voice in world music, to create the score for what was to hopefully become a visceral and immersive adaptation of Kipling’s work,” explains Serkis. “I knew that he would completely understand and empathize with Mowgli’s journey as an outsider who is trying to work out his place in two changing worlds. Being of Indian descent, yet having grown up in Britain, Nitin was perfectly in tune with the movie’s themes. We began to talk excitedly about creating an aural landscape that would bring jungle sounds and music together, weaving themes that spoke of a taught yearning soul, combined with a mythical journey towards destiny. And then, Nitin sent me Mowgli’s theme... it was one of the most beautifully haunting, uplifting and moving pieces of music I had ever heard, and it marked a huge turning point, an energy that brought the film to life. Nitin and his team of magicians had created its musical soul.”
Nitin Sawhney, amongst a multitude of international awards, holds six honorary doctorates and two fellowships from British universities and was awarded the Ivor Novello Lifetime Achievement Award in 2017. It was presented to him by his friend and collaborator Andy Serkis, for whom Sawhney also scored the true story romantic drama “Breathe” that same year.
The Mowgli: Legend of the Jungle soundtrack is now available for streaming and for purchase digitally. A CD configuration will be available February 15, 2019.
About WaterTower Music:
WaterTower Music, the in house music label for Warner Bros., has been releasing recorded music since 2001 and has released over 200 titles, including the film soundtracks and scores to Crazy Rich Asians, Wonder Woman, Interstellar, Game Of Thrones, Westworld, The Hobbit Trilogy, The LEGO® Movie, The Dark Knight Rises, Project X, Rock of Ages, Hairspray, Sex and the City, Elf, The Notebook, and Love and Basketball, among others.
About Netflix
Netflix is the world's leading internet entertainment service with 130 million memberships in over 190 countries enjoying TV series, documentaries and feature films across a wide variety of genres and languages. Members can watch as much as they want, anytime, anywhere, on any internet-connected screen. Members can play, pause and resume watching, all without commercials or commitments.