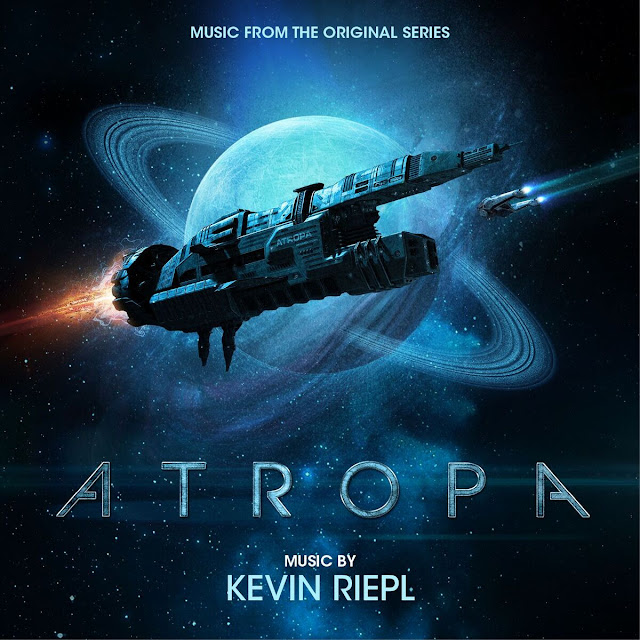 MovieScore Media launches into outer space with Kevin Riepl’s score for Atropa, the new Canal+ streaming series. The 7-part adventure consisting of 11-13 minute-long episodes tells the story of a troubled Off-World Officer, running from his past, but finding himself slammed directly into it when he boards the mysterious spaceship ATROPA. A love-letter to the grungy science fiction movies of the 70s and 80s, the seven episode digital series ATROPA features a twisting sci-fi plot, dazzling visual effects, and legendary genre actor Michael Ironside (Total Recall, Top Gun, Starship Troopers).
“The director of Atropa, Eli Sasich, and I see eye to eye when it comes to how music should work and what kind of role it should play in a story of this magnitude" says Kevin Riepl about the project. "Since we both share an insane love for all things sci-fi, working on the score for Atropa, from the very beginning of the first musical sketches to the final orchestra recording, has been very special. There is a lot of energy and emotion in this story and since the director and I are big fans of science fiction films, we agreed that the best way to capture and support this was employing the use of some traditional orchestra alongside 80s inspired synths & ambiences. On completion the score became a slight homage to 80s sci-fi.”
Composer Kevin Riepl is well-known to fans of video game scoring with his contributions appearing in various episodes of the Unreal Tournament franchise, Gears of War, the multiplayer first-person shooter Huxley and Aliens: Colonial Marines, which is based in the world of the Alien franchise. More recently, Kevin has been branching out into the world of film and television. His popular genres include horror movies with titles like Silent Night, Contracted and Cabin Fever: Patient Zero and animated superhero adventures such as the Batman Unlimited movies as well as Justice League Action.
MovieScore Media and its sub-label Screamworks Records have released over 250 soundtrack albums since the launch of the company in 2006. Among the many acclaimed albums in the catalogue are soundtracks for Let the Right One In (Johan Soderqvist), four volumes of TV series Merlin (Rob Lane et al), Centurion (Ilan Eshkeri), A Royal Affair (Cyrille Aufort & Gabriel Yared), Grand Piano (Víctor Reyes) and Stalingrad (Angelo Badalamenti). In its ‘Discovery Collection’, MovieScore Media has released world premiere recordings of scores by esteemed composers such as Michael Kamen, Basil Poledouris, Patrick Doyle, David Shire and Dario Marianelli. Recent projects include Automata (Zacarías M. de la Riva), Coherence (Kristin Øhrn Dyrud) and 13 Sins (Michael Wandmacher).
In 2012, an album released by MovieScore Media’s sub-label Screamworks Records, The Shrine (music by Ryan Shore), was nominated for a Grammy Award in the ‘Best Score Soundtrack for Visual Media’ category. MovieScore Media has been nominated to the International Film Music Critics Association Award for ‘Film Music Record Label of the Year’ six years in a row.
MovieScore Media's CDs are distributed worldwide by Screen Archives Entertainment, except in the UK (RSK Entertainment) and Spain (Resistencia). Albums are available digitally from all major digital platforms, including iTunes, Amazon, eMusic, Google Play and Spotify.
For interview requests, review copies and more information, please contact Chandler Poling at chandler@whitebearpr.com.
ATROPA (Original Motion Picture Soundtrack)
Kevin Riepl
TRACK LIST
1 Opening Titles 0:35
2 The Morinda 5:55
3 The Collision 0:54
4 What Is Happening? 2:22
5 Tether 7:36
6 Bringing Him In 2:25
7 Med Lab 1:49
8 Time 4:34
9 Cause of Death 3:26
10 Jensen's Cut 5:05
11 Bay 12 3:48
12 Cole Patrol (Part 1) 0:59
13 Where's Mason? 1:00
14 Cole Patrol (Part 2) 5:05
15 Been Here Before 1:52
16 Searching For Sanders 2:17
17 Regret 5:21
18 There Is a Choice 2:20
19 We Need Power 2:57
20 To The Escape Pod 2:13
21 Stop the Cycle 4:09
22 End Credits 1:41
23 Atropa 1:40
MovieScore Media
Release date digital: March 23, 2018
Moviescore Media MP3