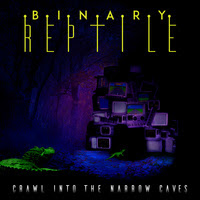 ABOUT THE NARROW CAVES
The Narrow Caves is the first Audiostate(TM) ever released, a new product combining the grandiosity of Hollywood films with the intimacy of audio to create an "ear-movie" experience. Adapted from a script by award-winning novelist, screenwriter, and director S. Craig Zahler (Bone Tomahawk, Wraiths of the Broken Land), The Narrow Caves features voice acting by Vincent D'Onofrio (Full Metal Jacket, Daredevil), Will Patton (Armageddon, Falling Skies), Lili Simmons (Bone Tomahawk, Banshee) and Wyatt Russell (Everybody Wants Some, Black Mirror). Binary Reptile provides an eerie score that contributes to the cinematic feel of this haunting piece.
CRAWL INTO THE NARROW CAVES is original music used as the score to THE NARROW CAVES.”
SYNOPSIS:
In Florida, 1983, two college students meet at a yard party and do not hit it off. Walter and Ruby have no reason to reprise this antagonistic encounter, but something strange and almost primordial burgeons within each of them. Their thoughts and dreams turn toward each other, and in very little time they find themselves in an intense and unique relationship. What lies at the bottom of their strange connection is unearthed when Walter joins Ruby on a holiday trip to her home in upstate New York, where a living darkness inhabits the woodlands that surround her family's mansion. This engrossing and unpredictable blend of mystery, horror, and romance subverts the idea of "fated love" while exploring strange compulsions, intense desires, and ancient mysteries that are best left buried deep in the earth.
ABOUT JEFF HERRIOTT
Versatile composer Jeff Herriott is equally comfortable and experienced in a range of musical settings, including contemporary classical music, indie rock, heavy metal, and experimental electronic projects. In 2015 Lakeshore Records released the soundtrack to BONE TOMAHAWK, his first film score.
Recipient of commissions from the Barlow Endowment for Music Composition, the MATA Festival, and the American Composers Forum, Herriott has had his classical works performed by leading soloists and ensembles across four continents. His music, which often includes interaction between live performers and electronic sounds, has been described as “colorful…darkly atmospheric” (New York Times), “hypnotic” (mainlypiano.com), and “incredibly soft, beautiful, and delicate” (Computer Music Journal). His works are released on the Albany, Innova, New Tertian, SEAMUS, SoundSet, and UKM2 labels.
Herriott’s work in popular and contemporary forms has primarily take shape with the sleepy rock band Bell Monks, whose 2012 album Let the Waves Carry Us (Mine All Mine Records), was named one of Madison’s 10 best and most ambitious of the year (madison.com), and the metal outfit Realmbuilder, whose three albums have been released through Sweden’s I Hate Records. Herriott frequently performs experimental work as an electronic/ laptop musician and has appeared alongside a range of musicians at galleries and clubs including John Zorn’s NYC space The Stone, Spectrum NYC, Buffalo’s Hallwalls, and the Inova Gallery (Milwaukee).
Herriott is a Professor of Music at the University of Wisconsin at Whitewater, where he is the coordinator of the Media Arts and Game Development Program and teaches courses in audio, multimedia, music technology, and composition.
ABOUT S. CRAIG ZAHLER
Florida-born New Yorker S. Craig Zahler worked for many years as a cinematographer and a catering chef, while playing heavy metal and creating strange theater pieces.  His debut western novel, A Congregation of Jackals, was nominated for both the Peacemaker and the Spur awards, and his western screenplay, THE BRIGANDS OF RATTLEBORGE, garnered him a three-picture deal at Warner Brothers and topped the prestigious Black List.  In 2011, a horror movie that he wrote in college, ASYLUM BLACKOUT (aka The Incident), was made and picked up by IFC Films after a couple of people fainted at its Toronto premiere.
As drummer, lyricist, and co-songwriter, Zahler makes music with his doomy epic metal band Realmbuilder, which is signed to I Hate Records (Sweden).  This followed his foray in black metal with the project Charnel Valley (whose two albums were released by Paragon Records).
Zahler’s uncommonly nasty horror western novel Wraiths of the Broken Land came out 2013.  The following year saw the release of his transhuman science fiction novel Corpus Chrome, Inc., the publication by St. Martin’s Press of his crime novel,Mean Business on North Ganson Street, and the twenty-one day shoot of his directorial debut, BONE TOMAHAWK.
Lakeshore MP3