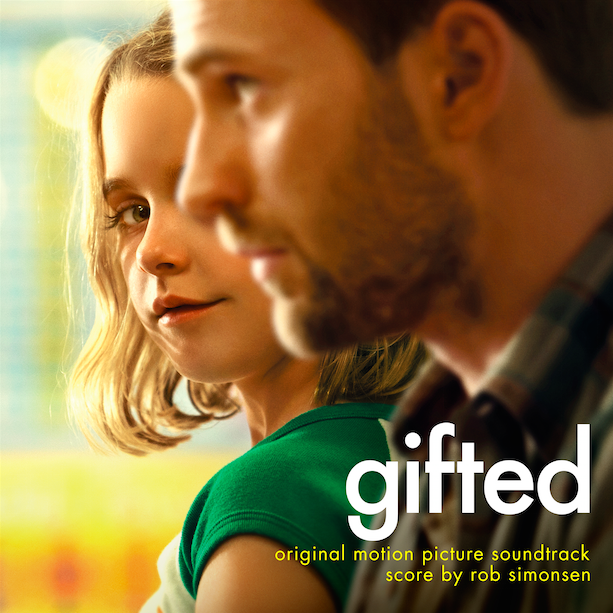 ABOUT GIFTED
Frank Adler (Chris Evans) is a single man raising a child prodigy - his spirited young niece Mary (Mckenna Grace) - in a coastal town in Florida. Frank's plans for a normal school life for Mary are foiled when the seven-year-old’s mathematical abilities come to the attention of Frank’s formidable mother Evelyn (Lindsay Duncan) whose plans for her granddaughter threaten to separate Frank and Mary. Octavia Spencer plays Roberta, Frank and Mary’s landlady and best friend. Jenny Slate is Mary’s teacher, Bonnie, a young woman whose concern for her student develops into a connection with her uncle as well.
ABOUT ROB SIMONSEN
Rob Simonsen has had a thread in the fabric of some of the most noteworthy and prestigious films of the past decade. He collaborated with director Bennett Miller to underline the unsettling atmosphere of the Oscar-nominated drama Foxcatcher, and spanned an eternity of star-crossed romance with The Age of Adaline (starring Blake Lively and Harrison Ford), also co-writing the film’s end credits song. He scored the Steve Carell-starring dramedy The Way Way Back with sensitivity, sympathized with the coming-of-age The Spectacular Now, and sweetened Zach Braff’s coming-of-middle-age film Wish I Was Here. Also under his belt is the horror-comedy The Master Cleanse, Roland Emmerich’s political drama Stonewall,and the Weinstein Company’s Burnt starring Bradley Cooper, Uma Thurman and Sienna Miller. His work in television has included the Joss Whedon Fox drama Dollhouse and the CBS ratings juggernaut Blue Bloods, led by Tom Selleck.
Simonsen’s most recent projects include the CBS hit television series Life in Pieces (starring James Brolin and Dianne Wiest), the comedy Going in Style (starring Morgan Freeman, Michael Caine, and Alan Arkin), and the drama Gifted (starring Chris Evans, Jenny Slate, and Octavia Spencer).
Prior to flying solo, under the apprenticeship of composer Mychael Danna, Simonsen contributed additional music to the scores for Ang Lee’s Life of Pi (which won an Oscar for Best Score) and Bennett Miller’s Moneyball (Oscar-nominated for Best Picture)—as well as Catherine Hardwick’s The Nativity Story, Sony Pictures Animation’s Surf’s Up, and Terry Gilliam’s The Imaginarium of Doctor Parnassus. With Danna, he co-composed the score for Marc Webb’s hugely popular indie romance (500) Days of Summer.
Simonsen’s compositional voice is the product of an education in jazz, electronic and traditional orchestral music. In 2013, he co-founded The Echo Society, a collective that provides a platform for composers to experiment and create for live performances around Los Angeles.
“I think we all want to feel like we’re invited to have an experience that we can participate in, rather than being told how to feel,” Simonsen says of film scoring. “I think we are often more successful in scoring when there is space for the viewer. However, I don’t think a ‘simple’ approach makes scoring any easier. Sometimes simple is a lot more difficult to nail.”
Lakeshore MP3