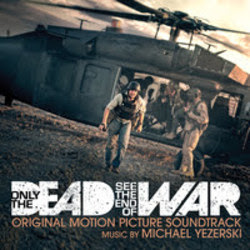 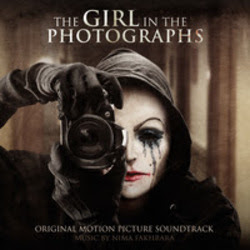 
Lakeshore Records will release THE GIRL IN THE PHOTOGRAPHS – Original Motion Picture Soundtrack digitally on April 29 and on CD shortly thereafter.  The album features the film’s original score by Nima Fakhrara (THE SIGNAL, EXISTS). This is the final film executive produced by horror legend Wes Craven.
“The idea behind the music was to create something with a very classical horror score in mind,” said Fakhrara. “We wanted to capture something of a throwback to the horror genre and the classic horror movies.”
At the start of THE GIRL IN THE PHOTOGRAPHS, Colleen’s life isn’t going anywhere. The small town natural beauty is bored with her dead end job at a grocery store and is ready to distance herself from her abusive boyfriend. In the midst of her turmoil, a pair of deranged serial killers begins leaving her photos of their mutilated victims. Her chance to escape comes in the form of Peter Hemmings (Penn), a hipster celebrity photographer who has traveled back to his hometown of Spearfish, South Dakota with a pack of models, intent on copying the killers’ intense and unapologetic artistry and use it for an important ad campaign. When he learns Colleen is their muse, Peter resolves to make her his own and use her as the centerpiece of a photo campaign in Los Angeles. But before Colleen can leave her old life behind, she must contend with the desires of her murderous stalkers who have chosen her last night in town to execute their most provocative work to date.
“One of the most important things about this movie was to make the killers human, feel their emotions, and have the audience care for them,” Fakhrara explained. “The opening kill captures their dread and their hunt. For me it was important to capture their environment and humanize them. There is nothing scarier and terrifying then a human killer, even though they have monster-like tendencies.”
Founder of Zoo Creatives, Nima Fakhrara is a film composer with studios in Los Angeles and New York City, who has worked with directors such as Golden Globe winner Hany Abu-Assad, and the father of found footage, Eduardo Sanchez. His most recent scores are to Los Angeles Film Festival Officially selected Consumed directed by Daryl Wein, the Sundance official selection The Signal, directed by William Eubanks, GATCHAMAN, directed by Toya Sato and starring Tori Matsuzaka and Ryohei Suzuki, a live-action take on the anime series Battle of the Planets, Site 146, directed by Gregory Levveseur, starring Denis O’Hare and Ashley Hinshaw, and produced by Alexander Aja (Piranha 3D), and EXISTS, directed by Eduardo Sanchez.  His upcoming projects include the video game 1979 REVOLUTION BLACK FRIDAY.
Born in Iran, Nima’s first experience with music was listening to his uncle play the santour. Influenced by this, he studied santour and became well versed in Persian classical music. After moving to the United States, Nima continued his musical studies and attended California State University Northridge where he obtained his degree in composition studies. However, his interest in music was not limited to composition and performance. He studied ethnomusicology, anthropology, and how to construct instruments, which has led to signature sound in Nima's music. This is apparent in his sampling and use of instruments from many regions of the world in various genres of film. The use of these new sounds alongside orchestral and ambient textures is a defining characteristic in his scores. In 2014, Nima open Zoo Creative Studios, where he alongside his most used musicians are housed.
Vertical Entertainment presents THE GIRL IN THE PHOTOGRAPHS currently in theaters. Lakeshore Records will release THE GIRL IN THE PHOTOGRAPHS – Original Motion Pictures Soundtrack digitally on April 29th and on CD shortly thereafter.

Lakeshore Records will release the ONLY THE DEAD SEE THE END OF WAR  – Original Documentary Soundtrack digitally on April 15, 2016.  The album features the film’s original score by Michael Yezerski (THE DEVIL’S CANDY, DRIFT).
“The only comment that the score really makes is to point to the profound tragedy of war and its consequences,” said Yezerski.
HBO Documentary Films ONLY THE DEAD SEE THE END OF WAR is war correspondent Michael Ware’s searing account of witnessing the birth of ISIS, and one of the most shocking war documentaries to come out of Iraq.  Ware arrived in Baghdad in 2003 as a novice reporter on a three-week assignment to cover the invasion of Iraq. He left seven years later, having gained unprecedented access to the Iraqi insurgency and American troops, as well as a myriad of demons – the after-effects of witnessing seemingly endless, horrific violence.
Examining the Iraq War and its moral consequences through the story of the rise and fall of jihadi terrorist Abu Musab al-Zarqawi, the founder of Al Qaeda in Iraq and the progenitor of ISIS, ONLY THE DEAD SEE THE END OF WAR is a harrowing and graphic account from both sides of the war zone, as well as an illuminating window into the origins of a modern terrorist organization. Directed by two-time Oscar® winner Bill Guttentag in collaboration with Michael Ware, the documentary debuted just days after the 13th anniversary of the Iraq invasion on HBO.  ONLY THE DEAD SEE THE END OF WAR is told through visceral hand-held video footage culled from hundreds of hours that journalist Michael Ware shot while reporting over the course of the war. This unique, on-the-ground view is combined with eye-opening narration for a frank, unsparing look at the Iraq War unlike any before.
“We realized very early on that the music had to tread carefully,” Yezerski explained. “We never wanted to portray a sense of triumphalism or (worse) colonialism so a ‘big cinema’ sound was abandoned very early. I worked closely with music supervisor Andrew Kotatko and editor Jane Moran to craft a palette that supported the story without commenting too much.”
To achieve this, Yezerski used strings at the heart of the score, interspersed here and there with lower brass, percussion and electronics.  He described, “There are echoes of an Oud but it’s not actually an Oud. All the things that sound like Middle Eastern instruments are actually electronics. I used the Arabic mode ‘Rast’ a little but not overtly. The lower strings often provide a pedal over which I’ve laid slow, rich melodies. I wanted to create a sense that the music is coming from the depths of the planet - an earth cry if you like.”
Hailing from Australia, Michael Yezerski has worked with many of the country’s finest directors including Claire McCarthy, Elissa Down, Shaun Tan (Oscar® Winner), Justin McMillan, Chris Nelius and PJ Hogan. He has written the scores for over fourteen feature films and has been nominated four times for the country’s highest film honor - the AACTA award for Best Original Score. He has won numerous industry and guild prizes.
Notable films include, The Devil’s Candy, The Black Balloon, The Lost Thing (Winner Oscar® Best Animated Short), The Waiting City and Mental. Michael wrote additional music for Transformers: Age of Extinction under renowned composer Steve Jablonsky.  Michael’s scores feature on some of Australia’s most acclaimed television productions including A Place To Call Home, Wanted, Peter Allen: Not The Boy Next Door. Catching Milat and Carlotta.
“The main theme is the melody heard in full in the final track ‘Only The Dead See The End of War’,” Yezerski explained. “We hear it in pieces before that, most notably in ‘The Dark Idea of Him’, but it’s not fully realized until the end. That final track is a requiem, a chorale for strings - an ‘In Memoriam’. The other theme is the ‘Dark Places’ theme which is also interspersed throughout. It is an exploration of the Rast mode and a meditation on dark progress with pulsing pizzicato strings carrying this theme.”
HBO Documentary Films presents ONLY THE DEAD SEE THE END OF WAR which debuted on HBO on March 28th. The documentary will also be available on HBO NOW, HBO GO and HBO On Demand.  Lakeshore Records will release the ONLY THE DEAD SEE THE END OF WAR  – Original Documentary Soundtrack digitally on April 15, 2016.
Lakeshore MP3